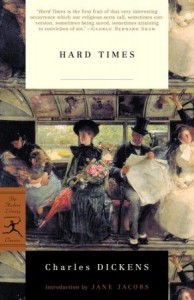 I was really looking forward to reading Hard Times when I pulled it off the shelf. I’m a Dickens fan. A Tale of Two Cities is one of my all-time favorites, and Bleak House is right up there, too. And I have to say this was the most Dickensian novel that Dickens ever Dickensed. Unfortunately, that’s not a good thing.

It lacked a lot of my favorite things about Dickens. There wasn’t much of a mystery. There weren’t many great lines. And there weren’t any truly great characters. Instead, it was packed full with the worst things about Dickens: impossibly noble poor people, ridiculous coincidences, secondary characters who banged on obsessively about one defining characteristic, and some sanctimonious — and ultimately hollow — social commentary.

The nearer I got to the end, the more I wondered if there was something different about the serialization of this book than his others, so I looked it up. Instead of monthly, this one was serialized in twenty weekly installments to boost lagging sales of his magazine. In this light, those problems listed above are mostly forgivable.

But the two worst things about this book can’t be blamed on his short writing schedule. The first: that fucking dialect. I hate dialect to begin with, especially when it’s overused. It’s something I’ve forgotten about Dickens after finishing his books because everything else is so good. Here, it just sticks out. This passage near the end is essentially the moral of the story, and I'm quoting letter-for-letter:

I can only picture Daffy Duck, thpitting in the other character’th fathe the whole time. It’s just awful. There’s another character whose speech is far more inscrutable, and it was a painful slog through anything he said.

For the second entirely avoidable issue, I have to give a ***BIG SPOILER WARNING*** because I’m about to give away both the “mystery” and the ending. One of the middle-class characters has set up one of the impossibly noble poor to take the fall for a small-stakes bank robbery. Middle-Class Man then has multiple opportunities to come clean but never does, not even after Poor Man falls down a well, spends a week at the bottom, and only dies after being recovered so he can give his impossibly noble final words.

We’re meant to root for his father and sister to be able to help him flee the country to escape punishment. He’s nearly arrested by the most sniveling, ass-kissing character in the book just to show how much sympathy we’re supposed to have for Middle-Class Man.

I’m not having it. It’s that same argument we’ve seen too much lately. “Don’t ruin this good boy’s life just because of one little oopsie that resulted in another man’s death.”

(This review was original published as part of Cannonball Read 10.)
Tweet