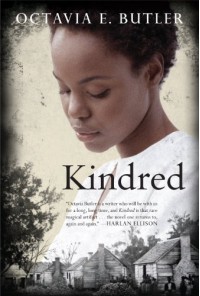 The things we take for granted

I first learned about Octavia Butler a few years ago when searching online for innovative novels and Kindred showed up on just about every list I came across. When I went to the bookstore, I had become so enthusiastic about her that I decided to buy not only this book but also Fledgling, and then I read the latter first after a coin toss. That was probably a mistake, because I disliked it so much that I put off reading Kindred indefinitely. I’d finally put it back on my to-read list before the CBR book club vote, so the timing could not have been more perfect.

The premise of Kindred seems simple enough, but therein lies its genius. Only a few pages in, Dana has a dizzy spell while unpacking in her new Los Angeles home and vanishes before her husband’s eyes, turning up in what she later learns is the antebellum South. She rescues a drowning white boy, reviving him with CPR and so upsetting the boy’s father that he’s about to shoot her when she has another dizzy spell and ends up back in her home, clothes soaking wet. She makes a few more of these trips across time, each progressively longer and more harrowing, figuring out along the way that the boy is linked to her own family history and realizing that her future life may be jeopardized if she doesn’t continue to help the boy into adulthood.

Dana quickly has to reorder her thinking to avoid the simplest of mistakes like looking white people in the eye. She has to swallow her anger rather than speaking up for herself or for any other slaves subjected to the brutal injustice of white people’s whims. She has to remember her actions and words may cause problems not only for herself but for others, too.

The mechanism of time travel is the least of Butler’s concerns here, but in using it as a framing device, she opens many rich areas for exploration: the experience of slavery through the perspective of a present-day, first-person narrator; the further degradations suffered by women of color in that era; the weaponization of education; the problems of interracial marriage even in the present day; to name only a few. This is a book about ideas, and those ideas get just as much attention as the action, a stylistic approach that leads to a lot of explanation through the narrator’s internal thought process and in her conversations with others. This causes the story drag in a few places, but in the end, I was so engaged by the overall work that I didn’t mind so much.

My biggest “aha!” moment came from Butler’s sly comparison between slavery and abusive relationships. Violence is used to control through the anticipation of more violence. Those in power use the “look what you made me do” defense to deny that they actually take pleasure in carrying out their sadistic punishments. The abused slowly abandon all hope of a better life in favor of trying to keep life from getting worse by becoming better servants. Butler makes this connection so clear that I’m disappointed I hadn’t thought of it before, and perhaps I wouldn’t have been so receptive to the idea had I not recently been thinking of and reading about abusive relationships.

This is a brilliant work by a groundbreaking author. I know it’ll be on my mind for a long time.

(This review was originally published as part of Cannonball Read 10: Sticking It to Cancer One Book at a Time.)
Tweet